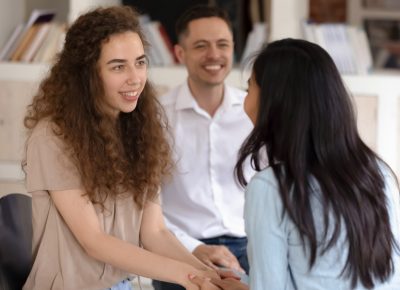 The Behavioral Wellness Center at Girard began its life as the Philadelphia Children’s Homeopathic Hospital established in 1896, and later moved to 8th and Franklin where it was renamed St. Luke’s and Children’s Medical Center. St. Luke’s was one of the first treatment facilities for alcoholism in the 1930’s and, in 1947, the Saul Clinic was created to provide medical and sub-acute treatment for alcoholism. The Helen L. Goldman drug rehabilitation program was established in 1904 and, in 1970, the clinic now known as the Goldman Clinic, began offering methadone treatment. St. Luke’s later became known as Giuffre and then as the Girard Medical Center, located at 8th Street and Girard Avenue.

In 1990, the North Philadelphia Health System (NPHS) was formed and incorporated through a merger of Girard Medical Center and another long-standing community hospital, St. Joseph’s Hospital, located at 16th Street and Girard Avenue. The hospitals operated under the NPHS corporate entity, with more than 1600 employees, and served as the economic engine in one of the city’s oldest, financially deprived, and medically underserved communities. For a few years, the NPHS was managed by Mercy Hospital System and the hospitals were restructured to eliminate duplication of services. St. Joseph’s provided medical and surgical services and Girard Medical Center provided Behavioral Health programs. In 2016, NPHS sold St. Joseph’s Hospital and only provided Behavioral Health services, e.g. Psychiatric Mental Health and Substance Use Disorder (SUD) programs, through the Girard Medical Center.

Now known as The Behavioral Wellness Center at Girard, the Center has always been at the forefront of innovation in the provision of treatment services for individuals with substance use and mental health challenges and a willing partner to the City of Philadelphia in serving City residents. In the early 1990’s, Center opened one of two Residential Intensive Non-hospital Treatment (RINT) programs to serve individuals discharged from the closing, Philadelphia State Hospital. Later, it partnered with the City of Philadelphia to address the number of individuals imprisoned who were in need of Substance Use Disorder treatment; and to develop a variety of Forensic Intensive Recovery (FIR) programs, which allowed men and women to be released from prison directly into care. In 2007, the Center again responded to a request from the City of Philadelphia to open specialized residential treatment programs for chronically homeless men in Philadelphia; and, along with five other programs, these programs have helped to significantly reduce homelessness in men as well as address the chronicity of untreated behavioral health issues with the City’s homeless population.

The role of The Behavioral Wellness Center at Girard in the health and wellness of the citizens of Philadelphia has been and continues to be critical, particularly given the Center’s location and easy access to much needed services for the surrounding communities.